I had some fun yesterday with a first experiment I did in Blender with a fully reflective concave half-sphere. This is a further step in this series about the construction of some special reflecting surfaces in Blender for virtual optical experiments.

One of the most spectacular effect in a NASA movie about a real half-sphere (see the first post of this series) is the virtual finger that seems to come out of the sphere when the physicist moved his own finger towards the center. I thought this might be a nice Blender experiment on a free day with bad weather outside. The finger had to be replaced by a small lengthy NURBS based cylinder in Blender. The main objective was to find some cylinder-like figure coming out of a half-sphere built in Blender. But as I was playing around I shot some additional images of the half-sphere from different positions to verify the appearance of ring-like patterns at the outer edges of the half-sphere, too.

I created the half-sphere for this experiment as a mesh with 64×64 faces, which I cut into two parts afterwards. I added the “subdivision modifier” at the end to get a smooth surface. But, probably, you could also have started with a high resolution Nurb sphere. I have not yet tested which methods results in faster rendering. Reflectivity was achieved by setting the material to be fully metallic without any roughness. The base color of the material was set to pure white.

The geometrical setup I choose for this post is the following: 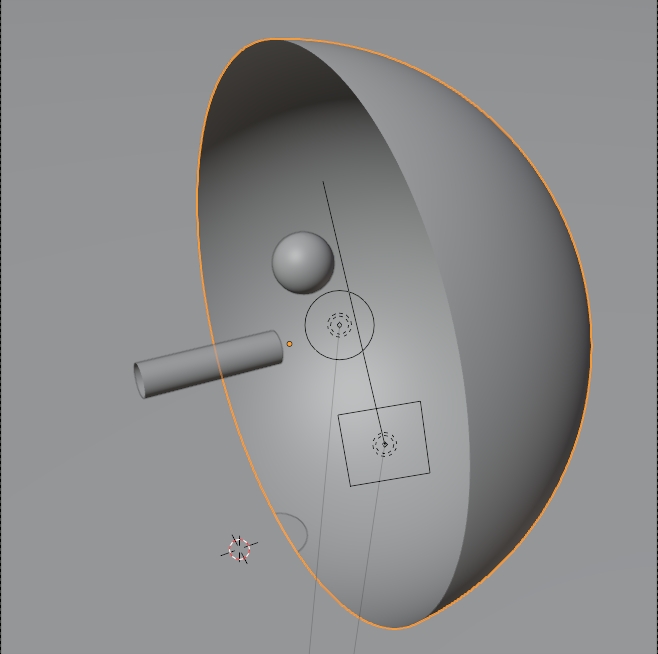 The image above reflects my first camera perspective. What we want to see from this perspective is a mirrored pattern of the cylinder-like (Nurbs) object – appearing in front of the background mirror-surface and opposite of the real object. Such an appearance would of course just be an illusion, but is the result of simple optics. The light rays reaching the camera stem of course from the inner surface of the half sphere. Note that the cylinder is placed on the central symmetry axis of the half-sphere. We later give it a metallic red surface. Note also that the Nurb’s cylinder is an open figure at both ends and not a solid one. So, we will get some tiny reflection patterns on the inside of the cylinders, too.

The small sphere is placed off the symmetry axis to show a different reflection effect. I gave it a green color. A few light sources have been placed at various positions.

As a background I chose again a kind of dusk with a “sun” just above the horizon. This gives us a distinct contrast rich orange-yellow horizontal stripe, which will later help us to identify multiple reflections inside the half-sphere. Remember that we should get an inner part of the half-sphere showing a sharp ring-like edge marking the border-line where the first double reflection occurs. Other ring-like shapes, which a camera positioned on the central symmetry axis and looking towards the half-sphere’s center should “see”, appear in the outer areas of the half-sphere. The distance between these ring like structures should systematically become smaller.

At the bottom of the half-sphere I have also added an extended reflective plane. This helps us later to watch different reflection patterns coming from two different angles towards the camera. The half sphere is placed a bit above the ground level, i.e. above the plane. This leads to incomplete rings resulting from multiple reflections of the horizon line.

From the perspective shown above we get the following rendered image: 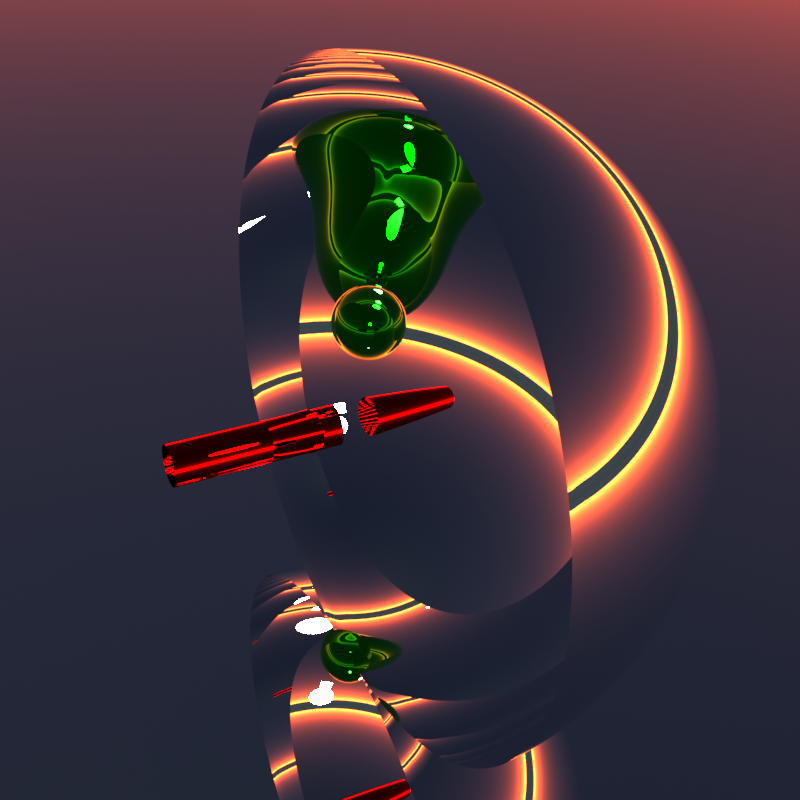 So, indeed we see an artificial cylindrical “figure” coming out of the inner part of the half sphere opposite the real red cylinder. In addition, the sharply edged inner area of the half-sphere is clearly visible – here a bit distorted as our camera is placed off the central axis. At the top of the half-sphere the effects of multiple reflections stemming from the horizontal line can clearly be seen. The green sphere leads to a reflection pattern which already appeared at the concave side of the S-curve (see the previous posts).

In a second experiment I placed the camera above the central axis at quite a distance away from the half-sphere and relatively high in z-direction. A yellow and somewhat extended light source has been added to get one more reflection pattern. 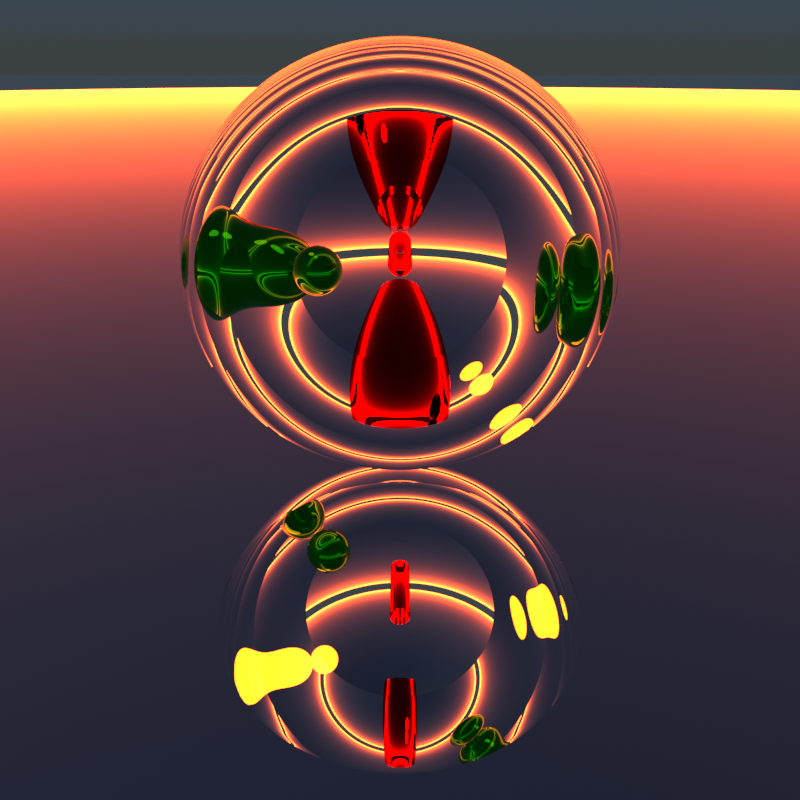 We clearly see the expected ring like structures due to multiple reflections at the upper edge of the half sphere. It seems that the basic optics works well in Blender. Something which is unrealistic in the images I create is the lossless reflection; in reality reflective patterns would get a bit weaker in intensity with every reflection.

Camera perspective from a position on the central symmetry axis

If we put the camera down to the central axis, the green sphere to the same height and switch off the yellow light sources we get the following result: 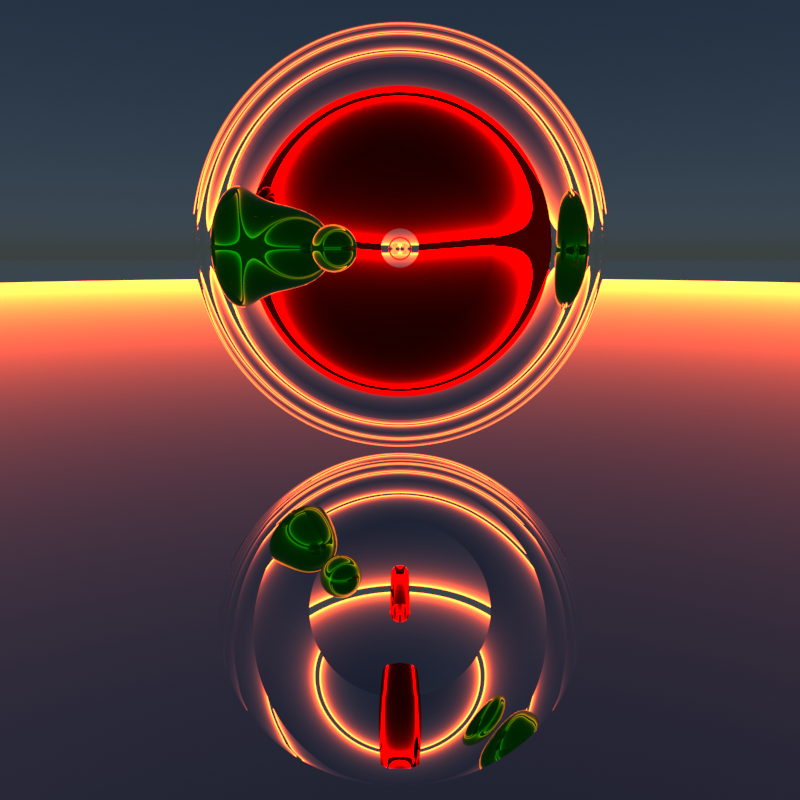 A bit off the symmetry axis

Let us eventually get the camera a bit offside the symmetry axis and move the green sphere into a position closer to, but not onto the main axis. Then we get the following picture: 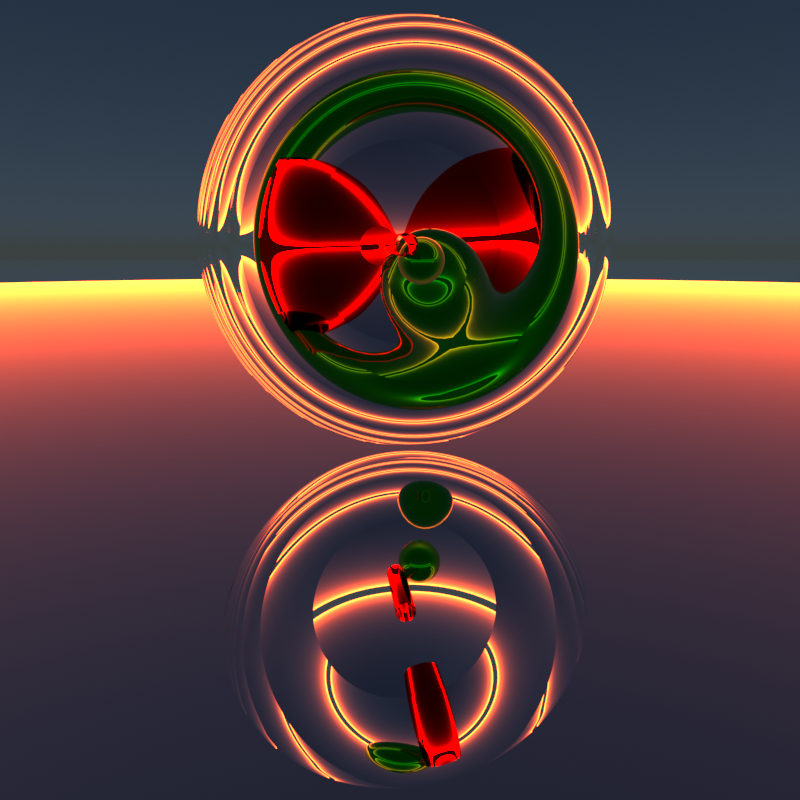 As we expected after our experience with the S-curve we get interesting reflection patterns from a mirroring half-sphere. We showed that Blender reproduces a pattern where a figure seems to grow out of the half-sphere when we move an elongated body into the sphere along the main symmetry axis. We also saw a strong dependency of the reflection patterns on the position of the camera. So, all is well prepared for more experiments.
And, again, a basic lesson is: Some things appear bigger than they are, because we look at a bloated image instead of the real thing. If only things were that easy in politics, too.