Some time ago I wrote a blog post about the still unsatisfactory Javascript support by the JSDT plugin for Eclipse – at that time for „Eclipse Neon R“. See:
Eclipse Neon 1 – Standard-JSDT mit Schwächen – zusätzliche Plugins

I can very well imagine how difficult it must be to create a new and better basis for JSDT. In addition there may be general limitations imposed by the Eclipse Neon platform itself. However, this kind of awareness won’t help me much as a web developer who needs or at least wants to use Eclipse Neon 2 or 3 for Javascript projects or PHP projects with Ajax/Ajaj clients.

In particular, I did and do not like the present limitations of the JSDT Outline View. I shall describe some of these deficits only briefly below. Anyone who recently used Eclipse Neon for Javascript development knows what I am talking about.

The Eclipse plugin Webclipse JSjet offered by the US company Genuitec (in combination with Tern) helps to overcome some of these deficits. So, I found it interesting to try using JSjet within Eclipse Neon 2 in a real project I am presently working on. Instead of going back to Eclipse Mars …

At first I was very happy to get more information in the Outline view than with JSDT when coding Javascript objects and methods. Compared with Neon’s JSDT it felt like a big step forward. However, not all that shines is real gold. So, in a second round of testing I looked a bit closer at code analysis capabilities of JSjet/Tern. And already with a relatively small test file I found some problematic aspects of the JSjet Outline information presented for object oriented Javascript code. This is the topic of a second post coming soon.

In addition I must say, that JSjet is not for free – at least not for a reasonable amount of development work per month. And ordering a license comes with a – in my opinion – strong negative side aspect – which I do not like at all. It has to do with the automatic and periodic information transfer to the company behind JSjet. This is the topic of a third post.

JSDT supports ES6 and ES2015 – at least as far as I have tested. But for conventional prototype based object and inheritance structures the JSDT Outline View was/is not of much practical use in Neon R or Neon 2. Reason: It did and does not show the full internal structure of Javascript functions, of constructor functions and their prototypes, of ES6 classes, of objects derived from constructor functions or classes or of objects in a prototype chain.

When testing „Neon R“ I still hoped for an improvement in Eclipse Neon 2. Now I work with PHP on a Neon 2 and Neon 3 platform. But the JSDT Outliner has become even worse. An editorial of the company Genuitec – although cluttered with advertisement – rightly criticizes some major deficits of JSDT in Eclipse Neon; see: https://www.genuitec.com/boost-eclipse-neon-javascript-development-with-jsjet/. In my own words:

The present JSDT Outliner provides only some deeper information on classes and methods declared by the newer „class“ statement of Ecmascript 6. However, even then we do not see properties (member variables) of a ES6 „class“. For constructor functions we cannot see see any deeper hierarchy structure at all – only the topmost class/function declaration itself. But no internal structure. E.g. no functions and , their prototype based „methods“ (i.e. defined functions of the prototype)

So, no „methods“ (i.e. functions of prototype objects) are listed in the Outliner. Tested on a freshly installed Neon 2. See below the very simple test code (really,
only for testing; I normally do avoid global variables … ). 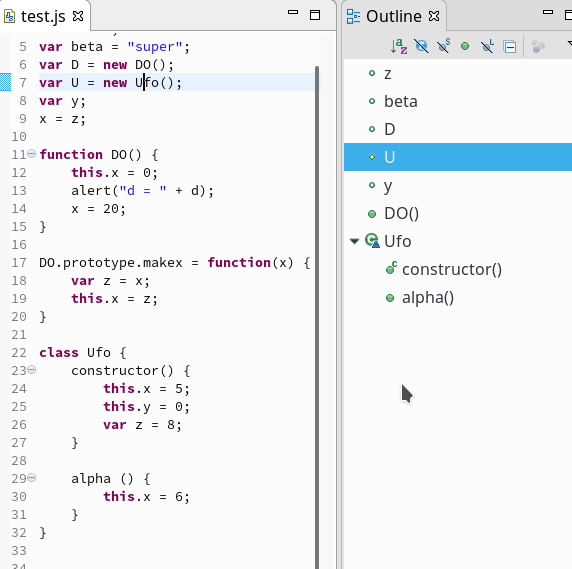 Frankly, I think this is a bit of a mess; you may also note that the global variable „x“, which is not declared explicitly with a „var“ or „let„ statement, does not appear at all in the JSDT Outliner.

You can’t work and navigate with such an Outliner in real world projects, especially when you do some more complex Ajax/Ajaj development ….. Also code changes show up in the JSDT Outliner only when and after a you explicitly save your JS file.

Probably, I am not the only one who has to support older Javascript modules based on the prototype declarations of objects and prototype based inheritance patterns. In times before and up to Eclipse Mars I used the Outliner a lot for navigation and quick oversight purposes. If you have more than just one object in a code and more than only a few methods your coding efficiency depends on a reasonable IDE functionality presenting the code structure and its hierarchy over a sufficient amount of hierarchy levels. The present JSDT does not help you much regarding this point.

So, I started to look for alternatives for or supplements to JSDT in Eclipse Neon. One could think about Aptana Studio. However, the Jenkins repository for Aptana 3.4.x on the Eclipse marketplace is presently not working (since midth of Feb 2017 by the way; due to license and legal aspects). And for the Aptana studio plugin for Eclipse I have always experienced some conflicts with other plugin packages and their editor components in the past. So, I tried some other things as e.g. Vjet, but nothing really convinced me.

Eventually, some weeks ago, I came across „Webclipse JSjet“ of the US company Genuitec. Genuitec claims that JSjet provides significantly more information about the code and object structure than pure JSDT. Basically, this is true. However, not all and everything is satisfactory with the JSjet solution either. Below and in the forthcoming posts I discuss only some more or less obvious points regarding the Outline View – so this is not going to be an in depth review. But it may at least give other Eclipse users some orientation. However, and to be fair: There are more interesting JSjet/Webclipse features than covered in my small blog post series. And some of these features are really worth a closer look and some tests. One example is the support of Javascript code debugging.

JSjet and the Eclipse Outliner – What is good?

I should first of all mention the following 2 points – which are related to the presentation of the code hierarchy, objects and object elements in the Outliner:

The analysis of a realistic Javascript code example with several objects included, therefore, provides a sufficient amount of information to get an overview and to support navigation throughout the code. See the following picture: 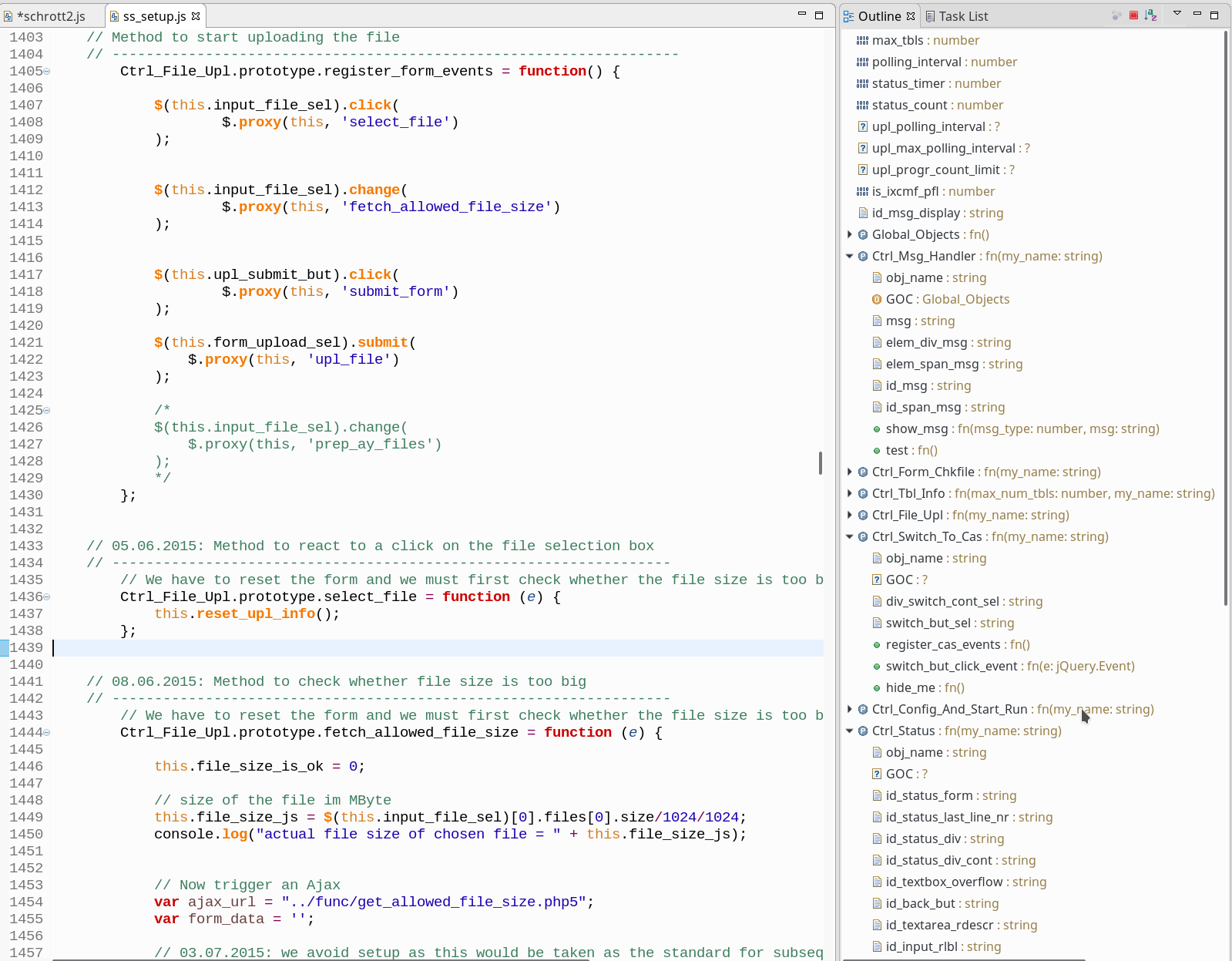 So – this looks good on a first glimpse. A deeper analysis
is the topic of the next blog post. With ambivalent results …

JSjet and the Outliner – what is missing?

There are more things which felt not satisfactory when testing JSjet. There are some obvious deficits, which you find very quickly when doing real work with it.

Most of these points were working at last in old versions of JSDT (Kepler, Mars).

Are there usage problems?

Yes, I experienced that the outliner did not always give me complete information on objects – even when reducing Tern’s scope to the present file. This tends to happen sometimes after having used the „hierarchy call“ feature of Eclipse JSDT, sometimes after a long time doing nothing on a project in the same workspace or after having worked on another project in the same workspace. It also happens when you switch the Tern analysis scope. …. or when you work with 2 eclipse windows …. It is unclear to me, what the real cause is – but it happened a few times with Eclipse 2. Maybe computing the Outline contents is not triggered correctly under some circumstances. The behavior became better after a recent update to Neon 3 and setting the Tern settings to quality instead of performance. In most cases closing all „.js“ files and opening them again helped.

JSjet and Tern overcome the problem of JSDT which provides too few information in the Eclipse Neon Outline view. From JSjet you get sufficient information for keeping an overview over your code and object structure and for navigating between functions, prototypes and derived objects.

However, after some real work with JSjet/Tern I got a bit confused about some hints in the Outliner which
seemed to be at least misleading. So, I decided to test the code analysis of JSjet roughly. And this led to the question :

Is all of the information provided by JSjet in the Outline view really valid?

See the next blog post
Webclipse JSjet, Eclipse Neon 2 and the Outline View – what I like and what not – part II
for the results!