Typically, virtual “veth” Ethernet devices are used for connecting virtual containers (as LXC) to virtual bridges like an OpenVswitch. But, due to their pair nature, veth” devices promise flexibility also in other, much simpler contexts of virtual network construction. Therefore, the objective of this article is to experiment a bit with “veth” devices as tools to attach the virtualization host itself or other (virtual) devices like a secondary Linux bridge or a VMware bridge to a standard Linux bridge – and thus enable communication with and between virtualized guest systems.

I got interested in “veth”-devices when trying to gain flexibility for quickly rebuilding and rearranging different virtual network configurations in a pen-testing lab on Linux laptops. For example:

As a preparation let us first briefly compare “veth” with “tap” devices and summarize some basic aspects of Linux bridges – all according to my yet limited understanding. Afterwards, we shall realize a simple network scenario as for training purposes.

A virtual “tap” device is a single point to point device which can be used by a program in user-space or a virtual machine to send Ethernet packets on layer 2 directly to the kernel or receive packets from it. A file descriptor (fd) is read/written during such a transmission. KVM/qemu virtualization uses “tap” devices to equip virtualized guest system with a virtual and configurable ethernet interface – which then interacts with the fd. A tap device can on the other side be attached to a virtual Linux bridge; the kernel handles the packet transfer as if it occurred over a virtual bridge port.

“veth” devices are instead created as pairs of connected virtual Ethernet interfaces. These 2 devices can be imagined as being connected by a network cable; each veth-device of a pair can be attached to different virtual entities as OpenVswitch bridges, LXC containers or Linux standard bridges. veth pairs are ideal to connect virtual devices to each other.

While not supporting veth directly, a KVM guest can bridge a veth device via
macVtap/macVlan (see https://seravo.fi/2012/virtualized-bridged-networking-with-macvtap.

In addition, VMware’s virtual networks can be bridged to a veth device – as we shall show below.

Our virtual network shall contain two coupled Linux bridges, each with a KVM guest. The host “mytux” shall be attached via a regular bridge port to only one of the bridges. In addition we want to connect a VMware bridge to one of the Linux bridges. All KVM/VMware guests shall belong to the same logical layer 3 network segment and be able to communicate with each other and the host (plus external systems via routing).

The RJ45 like connectors in the picture above represent veth-devices – which occur in pairs. The blue small rectangles on the Linux bridges instead represent ports associated with virtual tap-devices. I admit: This scenario of a virtual network inside a host is a bit academic. But it allows us to test what is possible with “veth”-pairs.

On our Linux host we use virt-manager’s “connection details >> virtual networks” to define 2 virtual host only networks with bridges “virbr4” and “virbr6”.

Note: We do not allow for bridge specific “dhcp-services” and do not assign network addresses. We shall later configure addresses of the guests manually; you will find some remarks on a specific, network wide DHCP service at the end of the article. 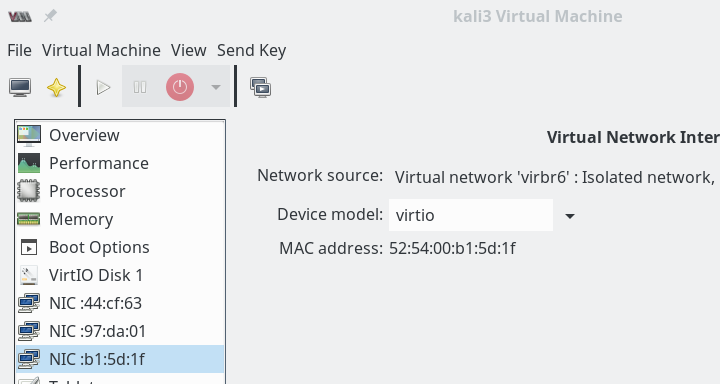 If we had defined several tap interfaces on our guest system kali3 we may have got a problem to identify the right interface associated with bridge. It can however be identified by its MAC and a comparison to the MACs of “vnet” devices in the output of the commands “ip link show” and “brctl show virbr6”.

Note that we do not see any IPv4-information on the “tap” devices vnet5 and vnet2 here. But note, too, that no IP-address has been assigned by the host to the bridges themselves.

Ok, we have bridges virbr4 with guest “kali2” and a separate bridge virbr6 with KVM guest “kali3”. The host has no
role in this game, yet. We are going to change this in the next step.

According to our example we shall attach the host now by the use of a veth-pair to virbr4 . We create such a pair and connect one of its Ethernet interfaces to “virbr4”:

Now, we assign an IP address to interface vmh2 – which is not enslaved by any bridge:

Now we try whether we can reach guest “kali2” from the host and vice versa:

So, we have learned that the host can easily be connected to a Linux bridge via an veth-pair – and that we do not need to assign an IP address to the bridge itself. Regarding the connection links the resulting situation is very similar to bridges where you use a physical “eth0” NIC as an uplink to external systems of a physical network.

All in all I like this situation much better than having a bridge with an IP. During critical penetration tests we now can just plug vmh1 out of the bridge. And regarding packet-
filters: We do not need to establish firewall-rules on the bridge itself – which has security implications if only done on level 3 – but on an “external” Ethernet device. Note also that the interface “vmh2” could directly be bridged by VMware (if you have more trust in VMware bridges) without producing guest isolation problems as described in a previous article (quoted above).

Now, can we communicate from “kali3” at “virbr6” over the veth-pair and “virbr4” with the host?
[Please, check the routes on all involved machines for reasonable entries first and correct if necessary; one never knows …].

Yes, obviously we can – and also the host can reach the virtual guest kali3.

This was just another example of how we can use veth-pairs. We can link Linux bridges together – and all guests at both bridges are able to communicate with each other and with the host. Good !

Our last experiment involves a VMware WS bridge. We could use the VMware Network Editor to define a regular “VMware Host Only Network”. However, the bridge for such a network will automatically be created with an associated, enslaved Ethernet device for and on the host. And the bridge itself would automatically get an IP address – namely 192.168.50.1. There is no way known to me to avoid this – we
would need to manually eliminate this address afterward.

So, we take a different road:
We first create a pair of veth devices – and then bridge (!) one of these veth devices by VMware:

To create the required VMware bridge to vmw2 we use VMware’s Virtual Network Editor”:

Note that by creating a specific bridge to one of the veth devices we have avoided any automatic IP address assignment (192.168.50.1) to the Ethernet device which would normally be created by VMware together with a host only bridge. Thus we avoid any conflicts with the already performed address assignment to “vmh2” (see above).

Reasonable and precisely defined address assignment to the bridges and or virtual interfaces can become a problem with VMware as well as with KVM /virt-manager or virsh. Especially, when you want to avoid address assignment to the bridges themselves. Typically, when you define virtual networks in your virtualization environment a bridge is created together with an attached Ethernet interface for the host – which you may not really need. If you in addition enable DHCP functionality for the bridge/network the bridge itself (or the related device) will inevitably (!) and automatically get an address like 192.168.50.1. Furthermore related host routes are automatically set. This may lead to conflicts with what you really want to achieve.

Therefore: If you want to work with DHCP I advise you to do this with a central DHCP service on the Linux host and not to use the DHCP services of the various virtualization environments. If you in addition want to avoid assigning IP addresses to the bridges themselves, you may need to work with DHCP pools and groups. This is beyond the scope of this article – though interesting in itself. An alternative would, of course, be to set up the whole virtual network with the help of a script, which may (with a little configuration work) be included as a unit into systemd.

Here we have a bit of a problem with Opensuse 13.2/Leap 42.1! The reason is that systemd in Leap and OS 13.2 is of version 210 and does not yet contain the service “systemd-networkd.service” – which actually would support the creation of virtual devices like “veth”-pairs during system startup. To my knowledge neither the “wicked” service used by Opensuse nor the “ifcfg-…” files allow for the definition of veth-pairs, yet. Bridge creation and address assignment to existing ethernet devices are, however, supported. So, what can we do to make things persistent?

Of course, you can write a script that creates and configures all of your required veth-pairs. This script could be integrated in the boot process as a systemd-service to be started before the “wicked.service”. In addition you may
configure the afterward existing Ethernet devices with “ifcfg-…”-files. Such files can also be used to guarantee an automatic setup of Linux bridges and their enslavement of defined Ethernet devices.

Another option is – if you dare to take some risks – to fetch systemd’s version 224 from Opensuse’s Tumbleweed repository. Then you may create a directory “/etc/systemd/network” and configure the creation of veth-pairs via corresponding “….netdev”-files in the directory. E.g.:

I tried it – it works. However, systemd version 224 has trouble with the rearrangement of Leap’s apparmor startup. I have not looked at this in detail, yet.