we invested some work into building layers and into the parameterization of a training run. Our rewards comprised a high accuracy value of around 99.35% and watching interactive plots during training.

But a CNN offers much more information which is worth and instructive to look at. In the first article I have talked a bit about feature detection happening via the "convolution" of filters with the original image data or the data produced at feature maps of previous layers. What if we could see what different filters do to the underlying data? Can we have a look at the output selected "feature maps" produce for a specific input image?

Yes, we can. And it is intriguing! The objective of this article is to plot images of the feature map output at a chosen convolutional or pooling layer of our CNN. This is accompanied by the hope to better understand the concept of abstract features extracted from an input image.

I follow an original idea published by F. Chollet (in his book "Deep Learning mit Python und Keras", mitp Verlag) and adapt it to the code discussed in the previous articles.

Referring to inputs and outputs of models and layers

So far we have dealt with a complete CNN with a multitude of layers that produce intermediate tensors and a "one-hot"-encoded output to indicate the prediction for a hand-written digit represented by a MNIST image. The CNN itself was handled by Keras in form of a sequential model of defined convolutional and pooling layers plus layers of a multi-layer perceptron [MLP]. By the definition of such a "model" Keras does all the work required for forward and backward propagation steps in the background. After training we can "predict" the outcome for any new digit image which we feed into the CNN: We just have to fetch the data form th eoutput layer (at the end of the MLP) after a forward propagation with the weights optimized during training.

But now, we need something else:

We need a model which gives us the output, i.e. a 2-dimensional tensor - of a specific map of an intermediate Conv-layer as a prediction for an input image!

I.e. we want the output of a sub-model of our CNN containing only a part of the layers. How can we define such an (additional) model based on the layers of our complete original CNN-model?

Well, with Keras we can build a general model based on any (partial) graph of connected layers which somebody has set up. The input of such a model must follow rules appropriate to the receiving layer and the output can be that of a defined subsequent layer or map. Setting up layers and models can on a very basic level be done with the so called "Functional API of Keras". This API enables us to directly refer to methods of the classes "Layer", "Model", "Input" and "Output".

A model - as an instance of the Model-class - can be called like a function for its input (in tensor form) and it returns its output (in tensor form). As we deal with classes you will not be surprised over the fact that we can refer to the input-layer of a general model via the model's instance name - let us say "cnnx" - and an instance attribute. A model has a unique input layer which later is fed by tensor input data. We can refer to this input layer via the attribute "input" of the model object. So, e.g. "cnnx.input" gives us a clear unique reference to the input layer. With the attribute "output" of a model we get a reference to the output layer.

But, how can we refer to the output of a specific layer or map of a CNN-model? If you look it up in the Keras documentation you will find that we can give each layer of a model a specific "name". And a Keras model, of course, has a method to retrieve a reference to a layer via its name:

Each convolutional layer of our CNN is an instance of the class "Conv2D-Layer" with an attribute "output" - this comprises the multidimensional tensor delivered by the activation function of the layer's nodes (or units in Keras slang). Such a tensor has in general 4 axes for images:

The "filter number" identifies a map of the Conv2D-layer. To get the "image"-data provided of a specific map (identified by "map-number") we have to address the array as

We know already that these data are values in a certain range (here above 0, due to our choice of the activation function as "relu").

Hint regarding wording: F. Chollet calls the output of the activation functions of the nodes of a layer or map the "activation" of the layer or map, repsectively. We shall use this wording in the code we are going to build.

It may be necessary later on to depict a chosen input image for our analysis - e.g. a MNIST image of the test data set. How can we do this? We just fill a new Jupyter cell with the following code:

This code lines would plot the eighths sample image of the already shuffled test data set.

Using layer names and saving as well as restoring a model

We first must extend our previously defined functions to be able to deal with layer names. We change the code in our Jupyter Cell 8 (see the last article) in the following way:

which provides names of the (presently three) defined convolutional and (presently two) pooling layers. The interface to the training function has, of course, to be extended to accept these arrays. The function "train()" in Jupyter cell 7 (see the last article) is modified accordingly:

Jupyter cell 7: Trigger (re-) building and training of the CNN

We transfer the name-lists further on to the function "build_cnn_simple()":

The layer names are transferred to Keras via the parameter "name" of the Model's method "model.add()" to add a layer, e.g.:

Note that all other Jupyter cells remain unchanged.

Saving and restoring a model

Predictions of a neural network require a forward propagation of an input and thus a precise definition of layers and weights. In the last article we have already seen how we save and reload weight data of a model. However, weights make only a part of the information defining a model in a certain state. For seeing the activation of certain maps of a trained model we would like to be able to reload the full model in its trained status. Keras offers a very simple method to save and reload the complete set of data for a given model-state:

This statement creates a file with the name name "filename.h5" in the h5-format (for large hierarchically organized data) in our Jupyter environment. You would of course replace "filename" by a more appropriate name to characterize your saved model-state. In my combined Eclipse-Jupyter-environment the standard path for such files points to the directory where I keep my notebooks. We included a corresponding statement at the end of the function "train()". The attentive reader has certainly noticed this fact already.

We now build a new function to do the plotting of the outputs of all maps of a layer.

I explain the core parts of this code in the next two sections.

Explanation 1: A model for the prediction of the activation output of a (convolutional layer) layer

In a first step of the function "img_grid_of_layer_activation()" we load a CNN model saved at the end of a previous training run:

The file-name "Model_fname" is a parameter.

From this tensor we can retrieve the size of the comprised quadratic image data.

Explanation 2: A grid to collect "image data" of the activations of all maps of a (convolutional) layer

Matplotlib can plot a grid of equally sized images. We use such a grid to collect the activation data produced by all maps of a chosen layer, which was given by its name as an input parameter.

If requested by a function parameter "scale_img_vals=True" we standardize the image data and limit the pixel values to a maximum of 255 (clipping). This can in some cases be useful to get a better graphical representation of the activation data with some color maps.

Our function "mg_grid_of_layer_activation()" returns the grid and dimensional data.

Note that the grid is oriented from its top downwards and from the left to the right side.

Plotting the output of a layer

In a further Jupyter cell we prepare and perform a call of our new function. Afterwards we plot resulting information in two figures.

Jupyter Cell 10 - plotting the activations of a layer

The first figure contains the original MNIST image. The second figure will contain the grid with its images of the maps' output. The code is straightforward; the corrections of the dimensions have to do with the display of intermittent lines to separate the different images. Statements like "ax.set_xticklabels([])" set the tick-mark-texts to empty strings. At the end of the code we choose a color map.

Note that I avoided to standardize the image data. Clipping suppresses extreme values; however, the map-related filters react to these values. So, let us keep the full value spectrum for a while ...

Training run to get a reference model

I performed a training run with the following setting and saved the last model:

This run gives us the following results:

Tests and first impressions of the convolutional layer output

Ok, let us test the code to plot the maps' output. For the input data

we get the following results: 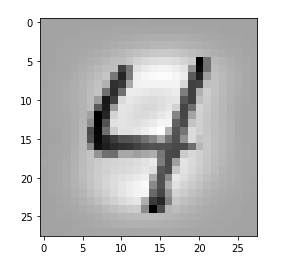 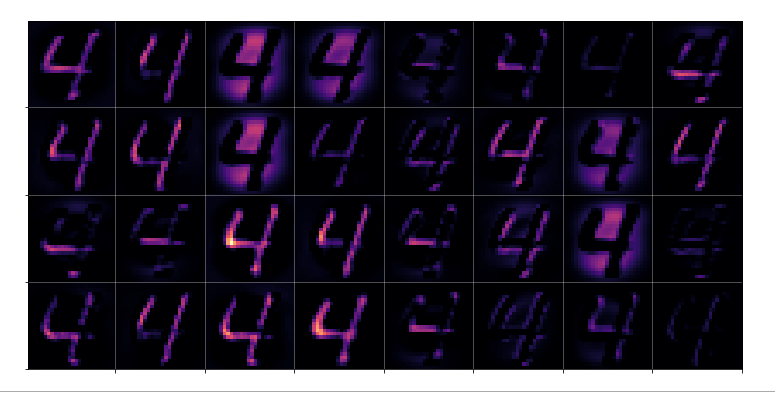 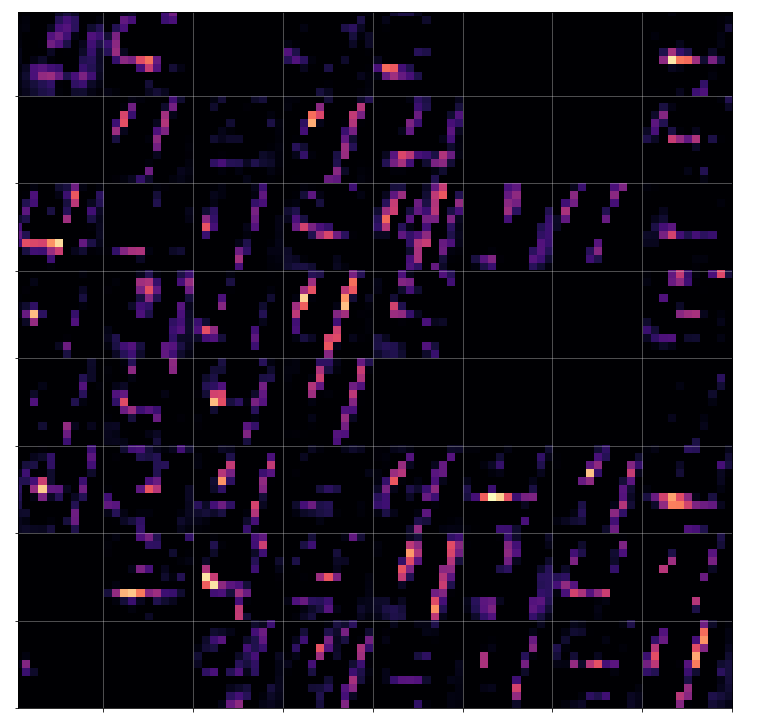 Keras' flexibility regarding model definitions allows for the definition of new models based on parts of the original CNN. The output layer of these new models can be set to any of the convolutional or pooling layers. With predictions for an input image we can extract the activation results of all maps of a layer. These data can be visualized in form of a grid that shows the reaction of a layer to the input image. A first test shows that the representations of the input get more and more abstract with higher convolutional layers.

we shall have a closer look of what these abstractions may mean for the classification of certain digit images.