So, at our present level of the analysis of a CNN, we cannot talk in a well founded way about "features" in the sense of conceptual entities. We got, however, the impression that eventual abstractions of some patterns which are present in MNIST images of different digits lead to FCP patterns across maps which allow for a classification of the images (with respect to the represented digits). We identified at least some common elements across the eventual maps of 3 different images of handwritten "4"s.

In this article I want to show that this is NOT the case. To demonstrate this we shall look at the image of a "4" which could also be almost classified to represent a "9". We shall see

What have "4"s in common after three convolutional transformations?

As in the last article I took three clear "4" images 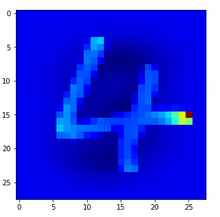 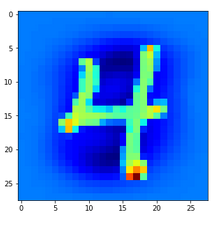 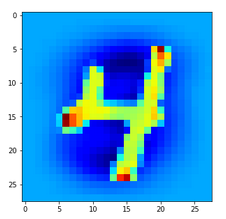 and compared the activation output after three convolutional transformations - i.e. at the output side of the last Conv layer which we named "Conv2D_3": 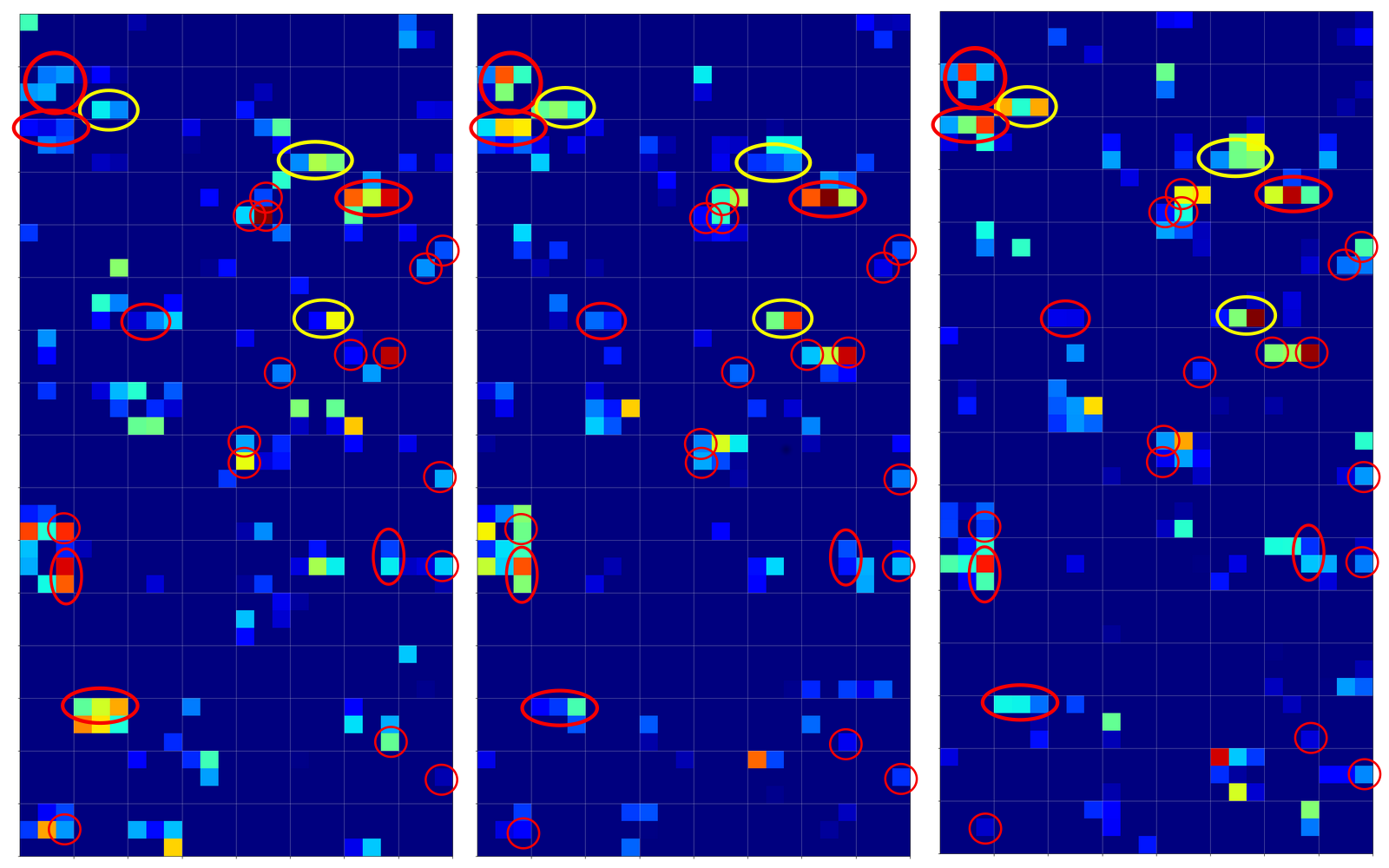 What have "9"s in common after three convolutional transformations?

Now let us look at the same for three clear "9"s: 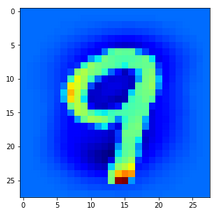 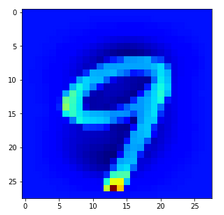 A comparison gives the following common features of "9"s on the third Conv2D layer: 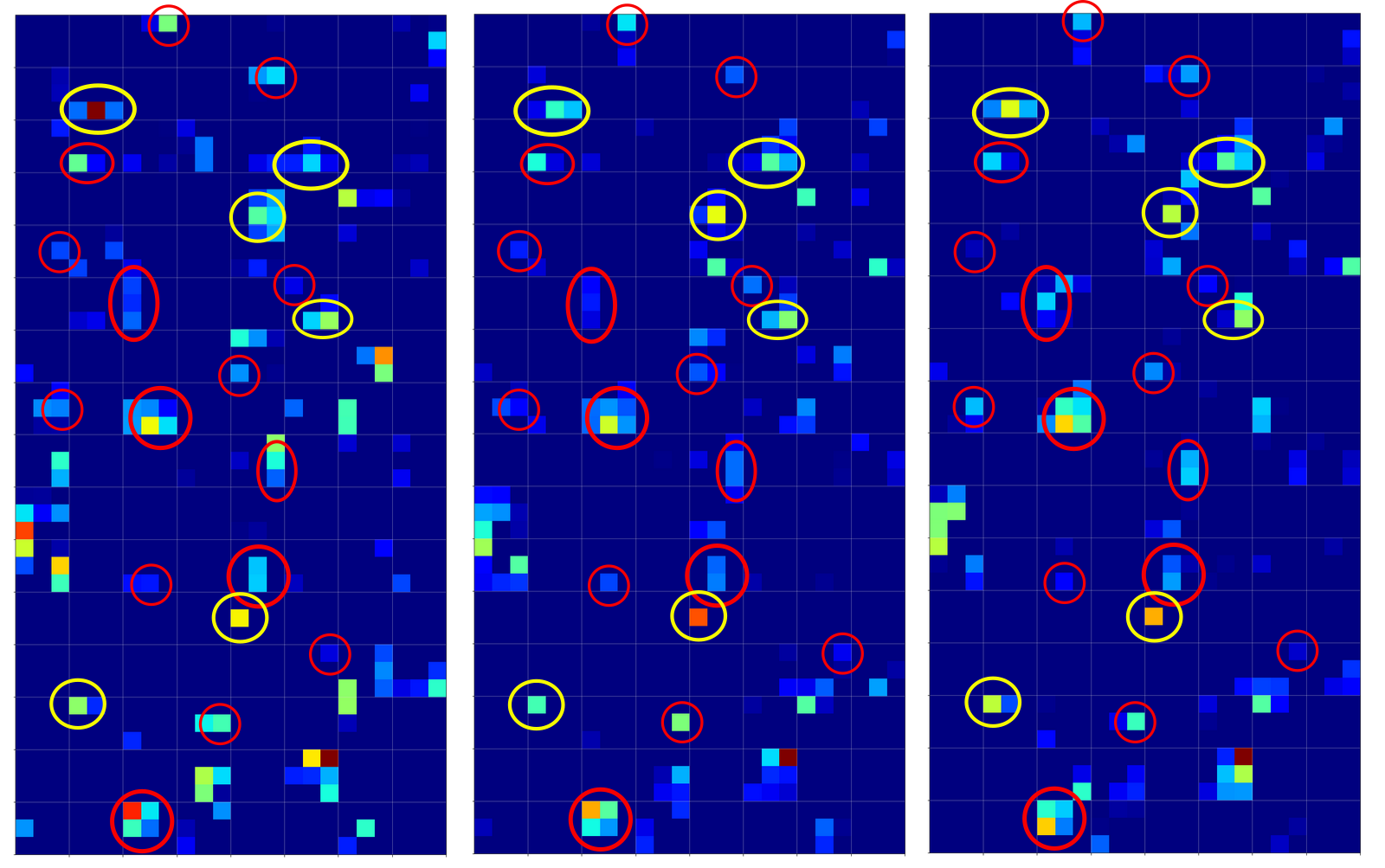 We again get the impression that enough unique features seem to exist on the maps for "4"s and "9"s, respectively, to distinguish between images of these numbers. But is it really so simple?

You certainly do not want to perform a training all the time when you want to analyze predictions at certain layers for some selected MNIST images. And you may also need the same "X_train", "X_test" sets to identify one and the same image by a defined number. Remember: In the Python code which I presented in a previous article for the setup for the data samples no unique number would be given due to initial shuffling.

Thus, you may need to perform a training run and then save the model as well as your X_train, y_train and X_test, y_test datasets. Note that we have transformed the data already in a reasonable tensor form which Keras expects. We also had already used one-hot-labels. The transformed sets were called "train_imgs", "test_imgs", "train_labels", "test_labels", "y_train", "y_test"

The following code saves the model (here "cnn") at the end of a training and loads it again:

Be careful to save only once - and not to set up and save your training and test data again in a pure analysis session! I recommend to use different notebooks for training and later analysis. If you put all your code in just one notebook you may accidentally run Jupyter cells again, which you do not want to run during analysis sessions.

What happens for unclear representations/images of a "4"?

Let us look at a regular 4 and two "4"s which with some good will could also be interpreted as representations of a "9"; the first one has a closed upper area - and there are indeed some representations of "9"s in the MNIST dataset which look similar. The second "4" in my view is even closer to a "9": 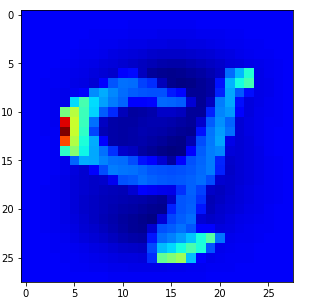 Now, if we wanted to look out for the previously discussed "unique" features of "4"s and "9s" we would get a bit lost:

The first image is for a clear "4". The last two are the abstractions for our two newly chosen unclear "4"s in the order given above.

You see: Many of our seemingly "unique features" for a "4" on the third Conv-level are no longer or not fully present for our second "4"; so we would be rather insecure if we had to judge the abstraction as a viable pattern for a "4". We would expect that this "human" uncertainty also shows up in a probability distribution at the output layer of our CNN.

But, our CNN (including its MLP-part) has no doubt about the classification of the last sample as a "4". We just look at the prediction output of our model:

93.5% probability for a "4"! A very clear discrimination! How can that be, given the - at first sight - seemingly unclear pattern situation at the third activation layer for our strange 4?

We shall not forget that the MLP-part of the CNN plays an important role in our game. It reduces the information of the last 128 maps (3x3x128 = 1152) values down to 100 node values with the help of 115200 distinguished weights for related connections. This means there is a lot of fine-tuned information extraction and information compactification going on at the border of the CNN's MLP part - a transformation step which is too complex to grasp directly.

So, it is interesting to visualize and see how the MLP part of our CNN reacts to the activations of the last convolutional layers. Maybe we find some more intriguing patterns there, which discriminate "4"s from "9"s and explain the rather clear probability evaluation.

We need to modify some parts of our code for creating images of the activation outputs of convolutional layers to be able to produce equally reasonable images for the output of the dense MLP layers, too. These modifications are simple. We distinguish between the types of layers by their names: When the name contains "dense" we execute a slightly different code. The changes affect just the function "img_grid_of_layer_activation()" previously discussed as the contents of a Jupyter "cell 9":

However, there remains one open question: We were too lazy in the coding discussed in previous articles to create our own names names for the dense layers. This is, however, no major problem: Keras creates its own names - if we do not define our own layer names when constructing a CNN model. Where do we get these default names from? Well, from the model's summary:

Our first MLP layer with 100 nodes obviously got the name "dense_14".

With our modification and the given name we can now call Jupyter "cell 10" as before:

I encircled again some of the nodes which carry some seemingly "unique" information for representations of the digit "4".

For clear "9"s we instead get:

Hey, there are some clear differences: Especially, the diagonal pattern (vertically a bit below the middle and horizontally a bit to the left) and the activation at the first node (upper left) seem to be typical for representations of a "9".

Our unclear "4" representations at the first MLP layer 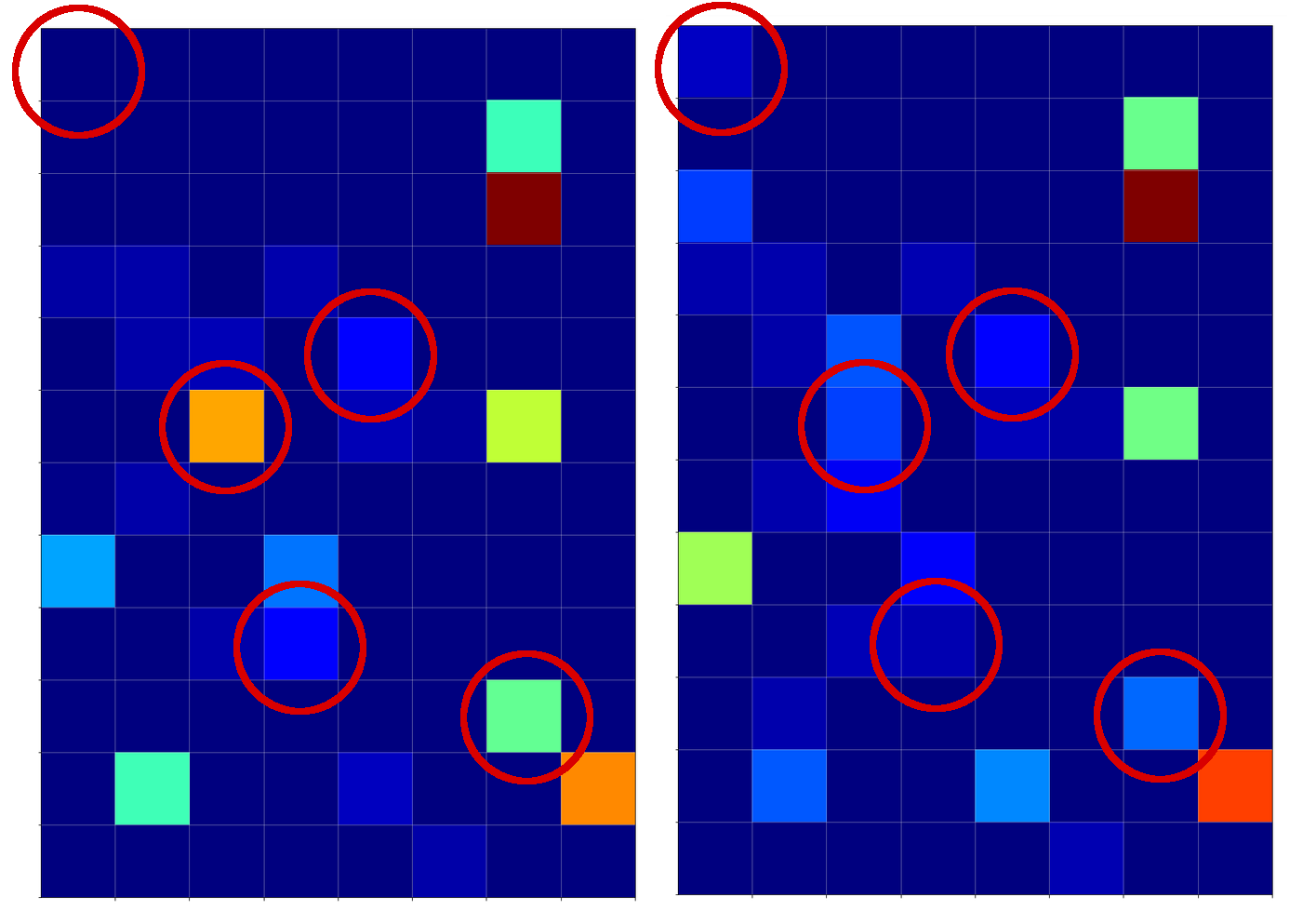 I think that we would guess with confidence that our first image clearly corresponds to a "4". With the second one we would be a bit more careful - but the lack of the mentioned diagonal structure with sufficiently high values (orange to yellow on the "jet"-colormap) would guide us to a "4". Plus the presence of a relatively high value at a node present at the lower right which is nowhere in the "9" representations. Plus too small values at the upper left corner. Plus some other aspects - some nodes have a value where all the clear "9"s do not have anything.

We should not forget that there are more than 1000 weights again to emphasize some combinations and suppress others on the way to the output layer of the CNN's MLP part.

Information which is still confusing at the last convolutional layer - at least from a human visual perspective - can be "clarified" by a combination of the information across all (128) maps. This is done by the MLP transformations (linear matrix plus non-linear activation function) which produce the output of the 1st dense layer.

I shall outline some required steps to visualize the patterns or structures within an input image which a specific CNN map reacts to. This will help us in the end to get a deeper understanding of the relation between FCPs and OIPs. I shall also present some first images of such OIP patterns or "features" which activate certain maps of our trained CNN.