Recently, I reactivated an old KVM-based installation of Kali Linux from 2018. So, some hurdles to upgrade the Kali distribution to version 2020.4 had to be overcome. Actually, it was a mess. I had to solve multiple circle like problems with package dependencies (Python3, Ruby, special packages in the Discovery section, …). Sometimes I had to delete packages explicitly. The new Kali minimum installation and its enhancement via meta-packages contributed to the problems. In the end I also reinstalled a the Gnome desktop environment – supplemented by a few KDE applications. Now, my Kali was fully functional again. However, the remaining disk space had shrunk … 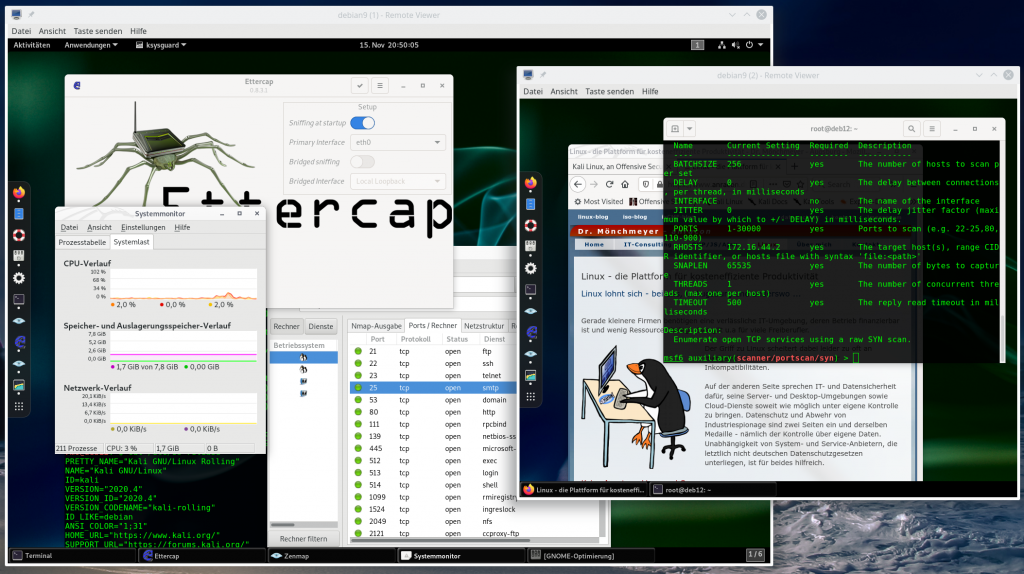 During all the back and forth with installing meta-packages I came close to exhausting virtual disk space, before I could clean up and remove packages again (with “apt-get autoclean” and “apt-get autoremove”). The virtual hard disk was a qcow2-file in my case. For further experiments I had to expand its capacity. This could easily be done by

where I had to chose a suitable “N” (20). The extended file must, of course, still fit into its filesystem on the KVM host!

Extending and rearranging partitions within the Kali system

The more difficult part in my case was the rearrangement of the two partitions ( one for the “/”-fs and one for swap) on the virtual disk for my Kali guest system. I did this within the running Kali system. Bad habit; such operations are dangerous, of course, but I trusted in the abilities of gparted. An extension of a mounted “ext4”-formatted partition is in my experience no major problem as long as there is enough free space behind its current location …. But, I recommend, of course, to make a backups of your virtual machine, before you start with any potentially dangerous operations regarding the file-systems of your Linux machines.

As my old Kali installation unfortunately did not have a LVM-layout and the disk partition table was of the old MS-DOS type, I actually had to move a blocking swap partition which was located directly after the “/”-partition. Meaning: I had to delete and later recreate it at a different position. Of course, after having disabled the swap in the running Kali guest :-). The partition keeping the “/”-filesystem (ext4) could then be extended without any problems on the running system. The new swap partition afterwards got its place behind the “/”-partition. According to “gparted” everything was OK after the partition changes: Then I rebooted…

The problem: A boot time of almost 30 secs …

The next restart took about 28 secs! But the machine came up in the end – which is almost a wonder, after I understood the cause of the problem. A standard boot-process until login normally required about 4 secs, only, before my filesystem changes. A major discrepancy and a clear indications of a major problem! Looking at the “dmesg”-output I got the impression that the delay had to do with operations occurring at the very beginning of the boot process. So, I checked the “/etc/fstab”. And got a first glimpse of the cause: The entries there referred to the UUIDs of the partitions! Not unexpectedly – this is the standard these days for almost all major distributions.

So, stupid me: Of course, the UUID of the swap partition had changed during the mentioned operations! I adapted it to the new value (which I got from gparted). I also checked whether there was
any reference to the swap-partition in the Grub command line (check “/etc/default/grub” for a “resume”-parameter!) To be on the safe side I also checked the result of “update-grub” in the file “/boot/grub/grub.cfg”). I did not find any references there. So, I gladly restarted my Kali system. However, the problem had not disappeared … .

Solution: The initramfs-configuration includes an explicit setting for the swap-partition!

Now, at this point there were not many options left. I started suspecting that the initramfs had a wrong entry. Now, where do we find options regarding the swap for the initramfs on a Debian based systems? A bit of duckduckgoing pointed me to the file

OK – I changed it to the new value. Then I used

to update the initramfs. And, guess what: The problem disappeared! I got my 4 secs of boot time again.

Never forget to check the UUID-settings for partitions after major changes of the filesystem-layout on your disks. Do the necessary checks not only on real host systems, but also on virtualized systems. Check both the “/etc/fstab” AND the Grub2-configuration AND the initramfs-configuration for possible references to changed or moved partitions.

Off topic – but related: When copying the contents of a partition with “dd” into another partition on your hard disk, e.g. for a backup, you should also care about the fact that you have two partitions with the same UUID afterwards. This may lead to major problems for any active Grub2. Always change the UUID of the copied partition with tune2fs before any reboots. If the copied partition was a bootable one, you also take care of its “/etc/fstab”-entries and initramfs settings, if you want it to be bootable in its new place.

General warning: Whenever you move/copy partitions, write down and save the original UUIDs – you may need them in case of trouble.